How to Shoot Better: Tools and Tips to Improve Factory Ammo Accuracy

Shooters have never had it so good when it comes to factory ammunition. The variety of ammunition sold is staggering. It used to be about all that was available was ammunition with a soft-point (SP) cup-and-core bullet and a few soft-point bonded bullets. All factory loads with the same bullet weight had about the same muzzle velocity, and choosing was simply a matter of deciding which brand you wanted. Now, there is a dizzying array of bullet types on the market, soft point cup-and-core, bonded, monolithic, tipped bullets of every type, specialized long-­range, coated, and on and on. Numerous performance levels are now obtainable including light recoil, standard velocity, high performance and even AR specific, just to name a few. The quality of factory ammunition has never been better, either. Factory ammunition has become so accurate, reliable and consistent that some wonder if it’s worth the time to handload.

Even with the quality of factory ammunition available, it is possible to do simple things to significantly improve the performance. As good as factory ammunition is, it is still a mass-­produced product and subject to variability in production. Companies have gone to extreme lengths to control and limit irregularities, but there is always a tolerance range on a number of variables in mass produced ammunition. To be honest, most high-­end factory ammunition is extremely consistent and loaded to very tight tolerances. But from time to time, within a Lot of ammunition, things can happen that use all of the tolerance range. In these instances, with some simple tools that you can be purchase, the most important of these variables can be measured and either sorted or corrected. In some cases, the changes significantly improve the ammunition performance. All of these measurements are external measurements of the ammunition. You can’t do much about propellant charge weight variation unless you are willing to pull bullets, weigh powder, adjust the charge weight and reload the bullet. This can be done, but it is very time consuming and will compromise the neck tension, which can introduce other variables in performance.

The first variable to consider in factory ammunition is headspace. Headspace is typically very consistent in factory ammunition. Headspace is defined as the distance from the head of the case to a specific, or datum, diameter on the shoulder. It is uncommon to encounter factory ammunition that has more than .001-inch to­ .002-inch variation in headspace. However, there are times during production when tooling breaks or wears and has to be replaced. This can introduce some differences in the headspace dimension, but all cases still fall within the range of allowable headspace. There is nothing technically wrong with this, it is just a variable that is introduced into the ammunition.

Variation in headspace won’t cause a lot of variation in ammunition performance as long as it is kept within reasonable limits, say .002 inch. However, if you are trying to get the most from your ammunition, measuring and controlling headspace can provide some small improvements in pressure and therefore velocity uniformity. Variable headspace creates differences in how much the cartridge moves before bottoming on the chamber’s shoulder and causes variation in firing-pin strike energy. It also introduces very small variations in case capacity.


Headspace and variable headspace can contribute to variations in ignition and chamber pressure. This will directly impact the standard deviation (SD) in velocity the ammunition produces. This is usually a very small effect, but I mention it because it can be measured and accounted for.


The next variable that crops up is what I call “bullet seating head height length.” This is a measurement from the head of the cartridge case to a diameter on the ogive of the bullet. Usually, the diameter on the ogive would be approximately the bore or rifling diameter of the barrel. It’s not terribly important what the diameter of the gauge is as long as it is smaller than bullet diameter and somewhere near the bore diameter. For example, I will measure some 6.5mm Creedmoor ammunition later in this article, but I do not have a 6.5mm gauge in my set so I use a .25-caliber gauge. It gives the same qualitative results, it just contacts the ogive slightly higher.

The length from the base of the case to the ogive on the bullet determines how much the bullet jumps to the rifling. If this length varies, the bullet jumps more or less. This can cause variability in chamber pressure and muzzle velocity. In production, this is caused by slight variations in the bullet ogive’s final shape, variability in neck tension or an inside burr on the case mouth. Bullets don’t always swage exactly the same when the ogive is swaged, which leads to very small variations in the ogive shape. Slight differences in the case neck anneal during manufacture can lead to differences in neck hardness and tension. When cases are trimmed to length in a mass-production setting, it is done with a high-­speed trimmer many times a minute. This process can (and usually does) leave a burr on the case mouth, inside and outside. This burr can vary and create either more or less force required to seat the bullet, which can lead to variations in bullet seating depth. Seating-depth variation causes different jump distances to the rifling, and this in turn leads to variations in pressure and velocity. The bullet seating head height is easy to measure and allows you to sort ammunition for the same bullet head height lengths. If you are a reloader, the same gauge can be used to measure and sort bullets prior to loading. 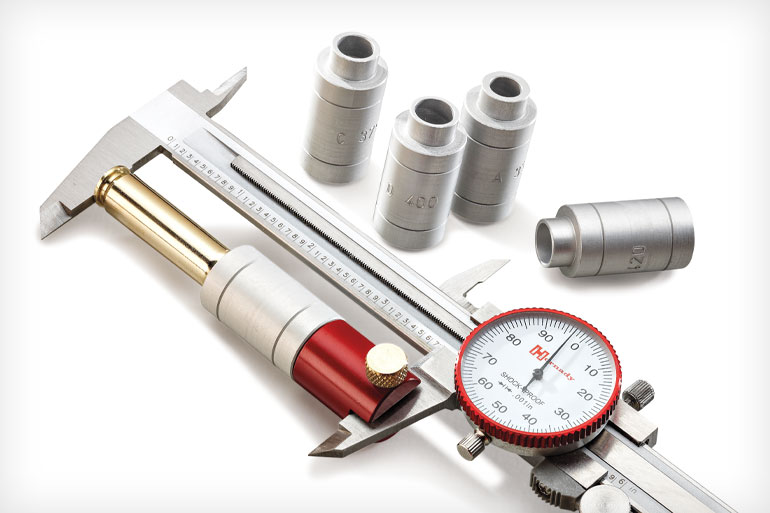 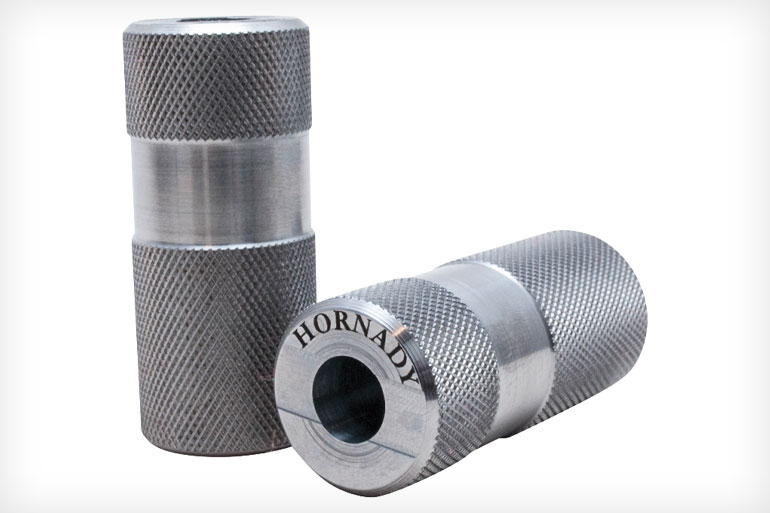 The last and most significant variation in loaded ammunition is the loaded round’s bullet runout. This is a measure of how straight the bullet has been seated in the case relative to the axis of the case. The more canted a bullet is on entry and exit of the barrel, the more it will deviate from the aiming point. This is a factor that can vary widely in factory ammunition. I have seen factory ammunition that is incredibly good with .001 inch to .002 inch of runout up to as much as .010 inch, or more. The bigger the runout gets, the bigger the groups. Typically, a runout of .003 inch or less will not appreciably effect group size. At that level, other factors will affect accuracy more than runout.

There are several tools that can measure the runout of ammunition, and some allow you to correct or straighten the ammunition. Doing this can provide a substantial improvement in the accuracy of factory ammunition, as we will soon see.

There are basically two ways to measure the headspace of a round of ammunition. The first is to drop the cartridge into a caliber-specific headspace gauge and measure with calipers the amount the head of the case that sticks out of the gauge. This method allows a comparison and sorting of ammunition. These types of gauges are available from Forester, Hornady, Lyman and L.E. Wilson. In my opinion, the easiest way to measure headspace is by using the Hornady Lock-­N-Load (LNL) headspace gauges. These are gauges that attach to your calipers that have different size inserts that correspond to the datum diameter of different classes of cartridges. This setup allows for extremely quick measurements of headspace.

Bullet head height distance can be measured with the Hornady LNL bullet comparator. It is just like the headspace gauge in that it has a series of inserts that attach to your calipers with different hole sizes corresponding to the caliber of bullet. The gauge stops on the ogive of the bullet, and you can measure and sort ammunition by head height.

Several tools are available for measuring a loaded round’s bullet runout. RCBS offers its Case Master Concentricity Gauging Tool ($144, rcbs.com) that allows the measurement of runout, but not the correction of it. The Case Master measures a number of other ammunition and case dimensions. Forester also offers its Co-Ax Case and Cartridge Inspector Tool ($138, forsterproducts.com) that only measures runout. On the otherhand, the Hornady LNL Concentricity Tool ($125, midwayusa.com) allows the measurement of runout as well as the correction of it. With this tool, you can measure and adjust the runout of loaded ammunition to very low and uniform values.


So how does this all work?

To show benefits using the methods I’ve described, I used a factory load of 6.5 Creedmoor ammunition to investigate what performance improvements can be expected from measuring, sorting and straightening the ammunition. I will not mention the manufacturer of the ammunition, as this test is not about any brand.

After several fouling shots I fired three, five-shot groups out of the box to establish a performance baseline. These results appear in Table 1.

I measured headspace of the loads with the Hornady LNL headspace gauge and found them to all be within .001 inch of the same measurement. This is quite good, and there would be nothing to be gained by trying to do any sorting. If you have a sample of ammunition that has upwards of .005 inch of headspace difference, you might experience an improvement by sorting out the extreme samples.

Next, I checked bullet head height with the LNL bullet comparator. As I mentioned, my set did not have a .26 comparator so I used the .25 comparator. I found a difference of .004 inch in head height with the majority of the rounds being within .001 inch of each other. This is very good ammunition. It is not uncommon to find head bullet height measurements varying by .006 inch or more. For ammunition of the quality I tested here, it would be good enough to sort out the extreme high or low rounds. To investigate the differences in performance bullet head height might cause, I fired three, five-shot groups with the rounds sorted by head height and all measured the same. As you can see in Table 2, there is no real statistical improvement in accuracy, but the velocity uniformity was substantially improved. The extreme spread (ES) and SD were significantly better than the out-of-the-box factory ammunition. This improvement in ES and SD resulted in smaller groups downrange because of less vertical stringing.

The last test I conducted was to fire three, five-shot groups. All were sorted to the same bullet head height and concentricity adjusted to .003 inch or less. I measured the loaded round concentricity of the ammunition out of the box with the Hornady LNL concentricity tool. The rounds varied from .001 inch to .007 inch. This is reasonable for factory ammunition, but definitely leaves room for improvement. You can see from Table 3 that there was a significant improvement in accuracy with the uniformity adjusted to virtually exactly the same as Table 2.

The results showed evidence of what can be accomplished by doing a little work to factory ammunition. It is not a big enough test to pound the table and claim absolute statistical proof, but it shows the trends. Definitively, I can say that after nearly 15 years of straightening the runout of factory loads, it consistently pays a big dividend in accuracy.

Factory ammunition these days is of unprecedented quality and performance. However, at times, there is room to do some very simple things to gain even more performance from factory ammunition. Even if you aren’t a reloader, by purchasing a couple hundred dollars of tools, you can add a new dimension to your shooting and gain a higher level of performance — and satisfaction in your results.