Hodgdon fuels the flight for handloaded 224 Valkyrie ammo with a wide selection of specialized propellants.

The name “Valkyrie” comes from Norse mythology and literally means “chooser of the slain.” Valkyries were maidens who served the god Odin in his rule over Asgard. Odin sent Valkyries to battlefields to choose those who were worthy to go to an afterlife in his magnificent palace called Valhalla.

The 224 Valkyrie is designed for long-range shooting, whether it be steel or paper targets, varmints, or small- to medium-sized big game. It is developed to mimic the long-range ballistics of the popular 6.5 Creedmoor, but in a smaller package, with the attendant reduction in recoil and implementation costs. It will fit comfortably in AR-15 rifles, although Federal points out it is also extremely effective in bolt actions.

The 224 Valkyrie’s case provides plenty of capacity, and an ultra-fast 1:7-inch barrel twist rate allows the Valkyrie to push long, heavy-for-caliber bullets to velocities that remain supersonic to 1,300 yards and beyond. The familiar 55-grain bullets are now the “lightweights.” Remember how the 1:9-inch twist made possible the 69-grain HPBT, and a 1:8-inch twist stabilized 80-grain bullets? The new 224 Valkyrie has spawned the development of .22-caliber bullets of weights unheard of only a few years ago. Did you ever think you’d be shooting 90-grain bullets in a .22-caliber round?

Just as significantly, the ballistic coefficients (BC) of these new bullets also reach new levels. For example, Federal’s 224 Valkyrie factory ammo is loaded with the new Sierra 90-grain MatchKing. The G1 BC of this bullet is .563, which is slightly higher than that of Hornady’s 6.5mm 130-grain ELD Match bullet used in the 6.5 Creedmoor. Hornady’s new 88-grain ELD Match bullet has a BC of .545 and is loaded in the company’s 224 Valkyrie ammo. Other super-slinky bullets come in weights of 75, 77, 80, and 88 grains, with correspondingly high BCs, and it is important to note that heavy hunting bullets also are now available.

Proper Propellants for Handloading the 224 Valkyrie

Handloaders can have a ball concocting their own Valkyrie loads. Hodgdon offers lots of powders suitable for the 224 Valkyrie, including CFE 223 and the IMR Enduron series, all known for limiting jacket fouling. That’s important for high-volume shooting.

The Hodgdon lab technicians have been busy and have tested hundreds of load recipes for the new round. I have visited this lab, and it is highly sophisticated. Handloaders are fortunate to have highly credible, scientifically developed, pressure-tested load data. 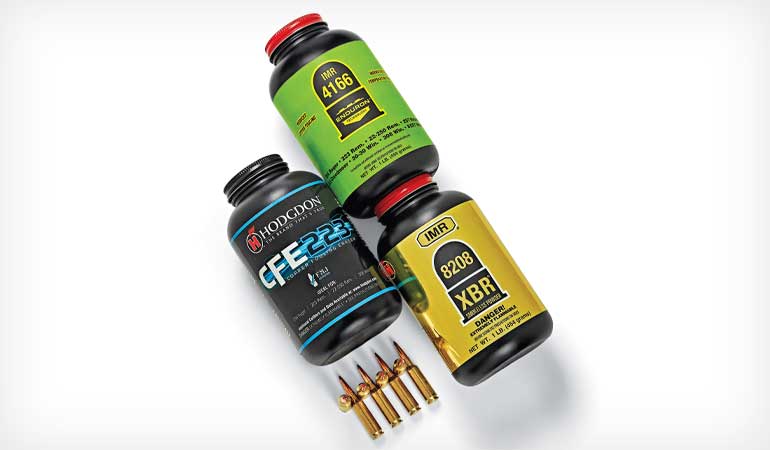 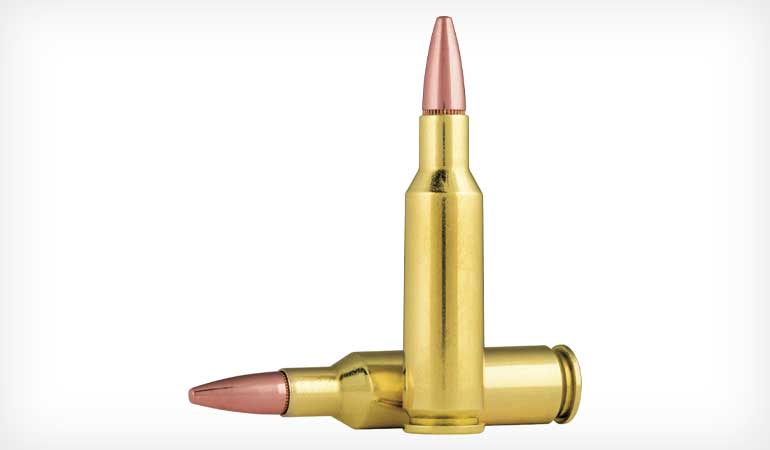 I was delighted to prepare and test 224 Valkyrie handloads for this manual. Before preparing the handloads, I realized good shooting results require a good gun, so I chose a brand-new CMMG Model Mk4 DTR2 with a 24-inch barrel and a 1:7-inch twist.

While several powders performed really well in the 224 Valkyrie, a fellow could shoot nothing but CFE 223 in it and dwell in ballistic Valhalla forevermore. However, for varmint loads with 55- and 60-grain bullets, IMR 8208 XBR gave good accuracy, too. It metered smoothly and produced very low standard deviations (SD). Benchmark and Varget also performed admirably, as did H414 and Ball-C(2). IMR 4166, IMR 4451, IMR 4895, IMR 4350, Superformance, and LEVERevolution shot okay but lagged in the accuracy department.

Before I start on an extensive loading program, I like to do a couple of things to get a feel for the round, the rifle, and the data.

First, I try as many factory loads as I can obtain for comparison. Federal lists four factory loads for the 224 Valkyrie: a varmint load with the Nosler 60-grain Ballistic Tip; an American Eagle 75-grain TMJ load for inexpensive “blasting”; a Gold Medal Match load that shoots the sleek Sierra 90-grain MatchKing; and a Fusion 90-grain softpoint load for hunters. The 60-grain load was out of stock at this writing, but I obtained and fired samples of the other three.

In addition, just out is a new match load from Hornady. It is loaded with the company’s revolutionary 88-grain ELD (Extremely Low Drag) Match bullet.

Second, I prepare and shoot what I call “calibration loads.” For these I review pressure-tested load data in the manual and select the powders that gave the highest velocities with the bullets tested. Then I load and fire the starting and maximum loads from the manual with those powders with each bullet, exactly duplicating their loads, if possible, and compare those results in the test gun with the manual’s velocities.

Hodgdon used the Nosler 55-grain Ballistic Tip, Hornady 75-grain ELD Match, Sierra 80-grain MatchKing, and the Federal Fusion 90-grain softpoint for its data. The Fusion bullet was not available as a component, so I used the Sierra 90-grain MatchKing instead.

The results from my “calibration loads” are shown in a separate chart. Bottom line: There was hardly any difference between my results and the manual’s data. If there was a trend, it was that with the starting loads, the 55- and 75-grain bullet velocities varied the least, while the 80- and 90-grainers showed somewhat more, but in opposite directions (80 grains, -37 fps; 90 grains, +33 fps).

All bullets except the Sierra 90-grain MatchKing varied only about 0.7 percent. The largest difference with the 90-grain MatchKing was 54 fps (2 percent). I should point out that this type of testing often reveals large differences, so this indicates to me that Hodgdon doesn’t inject a bunch of “blue sky” into its data. (After I completed my loading and shooting for this report, Hodgdon added load data for three additional bullets: the Sierra 50-grain BlitzKing, Swift 62-grain Scirocco, and the Sierra 69-grain Tipped MatchKing, and their loads are shown in the data section of this manual.)

Even though the 224 Valkyrie is hot off the press, excellent cases are already available from Federal and Starline. I used both for the preparation of my loads, and Federal and CCI primers were used throughout. Dies were from RCBS, and the proper RCBS shellholder is No. 19. I set the sizing die to set the case shoulder back only about 0.002 inch to prolong case life. All charges were weighed on an RCBS M-1500 electronic scale. Velocities were measured with an Oehler Model 35P chronograph.

One of the virtues of the Valkyrie is that its maximum cartridge overall length (COL) is 2.26 inches so that it will fit in an AR magazine. However, it is important to note that one cannot just seat each and every bullet to that length without some problems, so I had to do some adjusting of COLs with some bullets. In the slam-bam world of ARs, I like to have the bullets seated to achieve the maximum contact with the case, so I seated the lighter bullets to the base of the case neck. This resulted in COLs shorter than 2.26 inches for some bullets, even the longer ones, but most bullets worked fine at 2.26 inches. Nevertheless, four bullets had to be seated considerably deeper to avoid sticking a bullet in the barrel throat: the Barnes 70-grain TSX BT, Hornady 70-grain GMX, Speer 70-grain JSP, and Swift 75-grain Scirocco II. This may be just a quirk of my rifle, but it is something the 224 Valkyrie handloader needs to be aware of. All loads functioned perfectly through the magazine at the COLs shown in the chart.

The four “hunting” bullets I tested were fast enough and accurate enough to justify their use on smaller big game; just remember to seat them “short,” as previously noted. The Barnes TSX BT shot fine with either H414 or CFE 223, with the latter powder giving over 3,000 fps. The Nosler 60-grain Partition liked 24.5 grains of Benchmark for 3,078 fps and a 0.71-inch group average. The Swift Scirocco II favored Ball-C(2) and grouped close to a half-inch.

Using computer ballistics software, one can easily compare the new 224 Valkyrie to other “long-range” cartridges. In a nutshell, the 224 Valkyrie stacks up favorably for trajectory, wind drift, and accuracy with just about any round, but you can’t match the energy level of a 130- to 140-grain 6.5mm bullet with an 80- or 90-grain .22-caliber bullet. So that leaves the decision on hunting with a .22 up to the individual hunter, depending on the size of the quarry and the bullet chosen.

Valkyrie is an interesting name and concept for a cartridge, and my shooting results confirm the new round can fly with the best of them.